Just siphoned the Hefeweizen to a secondary fermentation vessel, a 5Gal glass carboy. Now that the trub has settled out, it looks to be a nice, hazy golden color, and the yeast did a good job of imparting the characteristic flavors. Current gravity is somewhere around 1012, which seems on target (OG was 1050). The small sample I took my gravity reading off of had a wonderfully zesty and refreshing taste.

This Saturday I brewed another new style (to me), a Bavarian Hefeweizen (at the request of my partner, Christie). This was a rather unique recipe I culled from the BYO magazine’s recipe archives, this recipe was originally publised in the May 1998 issue.

The characteristic that made this brew unique was the fact that it used 61% wheat grain — giving the mash the potential to stick on me, and cause me all kinds of new found headaches. Under the advisement of the Brew Strong podcast, and my LHBS, I picked up a pound of rice hulls, just in case things got sticky…

I made a rather loose mash, so it was more like soup than my previous mashes have been, and I thought this might help somewhat. It not only made the mash a lot easier to stir, but it also made my step-mash much easier to homogenize.

The added weight to my mashing pot made it a little more challenging to pour into my lauter tun, but I managed to get away with only a couple spilled grains.

The sparging phase was another area where I made an improvement to my process this week. Instead of sparging with the recipe’s suggested volume of water, I instead overestimated the amount I would need, and took progressive gravity readings on the second runnings outflow until I hit 1008, then I stopped sparging. Scientific measuring devices are awesome!

The boil went well, and then I made one final improvement to my process. This time, instead of pouring the chilled wort through the funnel a bit at a time as it filtered through, I used my siphon, which allowed a slow transfer, leaving a lot of the hop gunk in the pot.

The recipe I used is:

This was a modified version of the magazine recipe, partly due to what was available to me, and also what was recommended by my LHBS. I’ll be bottling with Wheat DME instead of corn sugar as well. At this point, primary fermentation has begun and has been ongoing for 48+ hours.

Just a quick update on the home brew schedule: While my first AG brew was not a disaster, it was definitely a learning experience (read: I messed things up). My second batch, a porter following Papazian’s Silver Dollar Porter recipe turned out deliciously (only 2 weeks in the bottle), and the Arrogant Bastard clone (based on this recipe) tasted amazing (and very, VERY close) on bottling night. Things are looking up.

I’ve also had a tour of the local brewery here in Orono, The Black Bear Brewing Co. It’s really cool to see the kind of equipment he has to play with, and to hear his opinions on some of it. Thats an idea for another post.

I’m planning another brew this Saturday, but can’t make up my mind what I want to do. Suggestions welcome. 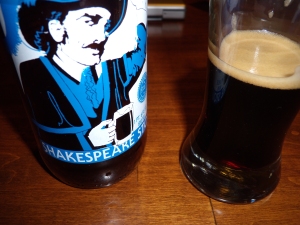 I recently had another fine beer by Rogue brewery, the Rogue Shakespeare Stout.

I poured it from a 22oz bomber into a glass. It poured a near black color with red highlights, and a modest 1″ head that dropped to about 3/8″ and retained throughout consumption.

It smelled of roasted malt, and a subtle citrusy hop aroma. The taste was smooth and creamy, roasted/burnt malt character, coffee, with a very surprising, but balanced hoppy bitter aftertaste.

This past Saturday was Big Brew Day. To celebrate, I decided to try out a clone recipe of the Arrogant Bastard Ale by Stone Brewing Co. It was a great beer to brew, it smelled delicious all the way through. And at 13# of grain, it was the largest all-grain brew I’ve tried.

The one thing that was slightly different about this brew, was that I was pitching the wort onto a now 3rd generation batch of yeast. I had about 2-2.5″ of yeast slurry on the bottom of a 6.5Gal carboy, which is a lot of yeast for a 5.5Gal batch of beer.

I had bubbles within 5 minutes of settling the brew down in my pantry. Within an hour, I had several inches of krausen.

I then went out, made a bonfire, grilled dinner, and had a beer in the backyard. Several hours passed, and I decided to come in for the night. One last check on the newly brewed batch. I found beer misting out through the airlock — the krausen was about 6 inches high and had completely filled the airlock, and the air was forcing beer to mist out and all over everything in my pantry. I replaced the airlock with a tube for blowoff, and ran that into a jar full of water.  The sides of the carboy were warm to the touch. Edit: not a good thing!

So, do not underestimate pitching a brew with a decent food source onto a large yeast cake. You will see a very active and somewhat violent fermentation, and you should be prepared. Set up for a blowoff, don’t try to use a regular airlock.

By Sunday morning, the fermentation had slowed to a bubble every 30 seconds. Under 12 hours. Wow. There’s now a regular airlock on the carboy. I can’t wait to try this brew.